NOW ACCEPTING ARCHERS FOR COACHING IN 2023. CLICK HERE TO APPLY

In this post, we’re going to look at the different options for your stance and help you choose which stance works best for your technique and your body. You can read more detail on Stance and Posture on our dedicated archery technique page.

The Fastest Way to Learn Archery

Save years of frustration and improve your technique and scores today. Without spending thousands on equipment or travelling hours for coaching. Plus OAA readers get 20% off.

What is the square stance?

Place both feet either side of the shooting line, equidistant from each other and slightly wider than shoulder width apart. A line drawn through your heels should point at the gold. You can see this in Image 1. The hips remain in line with the feet. The shoulders are also in line with the feet and hips.

Benefits of the square stance

The square stance is simple and efficient. There is minimal torso and abdomen rotation required to achieve shoulder alignment. Therefore, it can be quicker to learn and maintain correct vertical posture because it is generally easier for you to feel leaning towards or away from the target.

Because the shoulders are aligned with the hips and feet, they are naturally more closely aligned to the target. This means the square stance can make achieving correct shoulder alignment easier for some people. You can see how the shoulders, hips and feet are all in alignment in Image 2.

The square stance places a low amount of stress on the body. This archery stance can be helpful if you lack flexibility around the back and torso, as a smaller amount of torso rotation is needed. Because you don’t need to twist the body so much with the square stance, the back and spine are under less load. The square stance also works very well if you rest the bow on the foot and lift it just before shooting. Read more about this in our Set Position technique section.

Less strength is required to obtain positioning with the square stance but it isn’t an easy option. You need the same amount of strength to perform at the same level regardless of stance. Instead, the positioning required with the open stance simply makes it more obvious if you are lacking in strength.

Compromises of the square stance

The square stance has a narrower base along the shooting line than an open stance. Some archers may feel less consistent weight placement along the toe-heel plane due to this. As a result, the square stance can be less stable in the wind.

To make the square stance as stable as possible, you must use the correct width of stance for you. 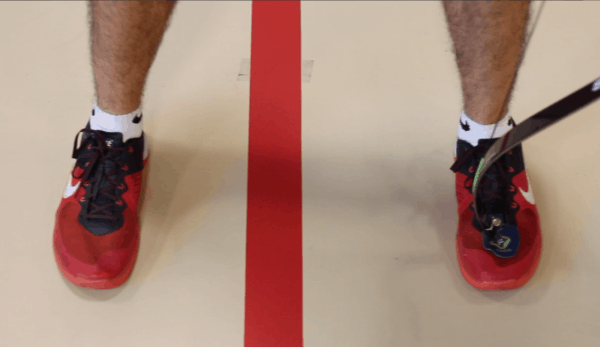 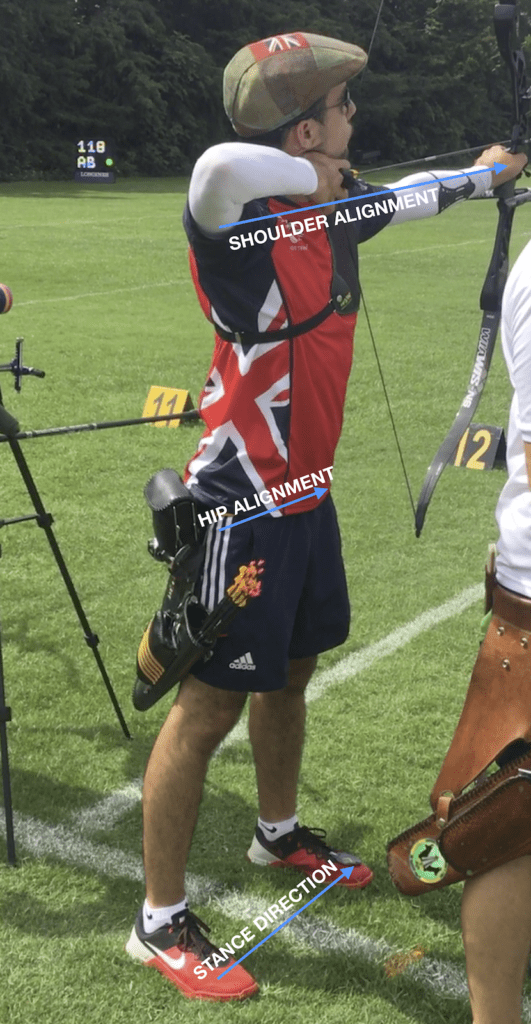 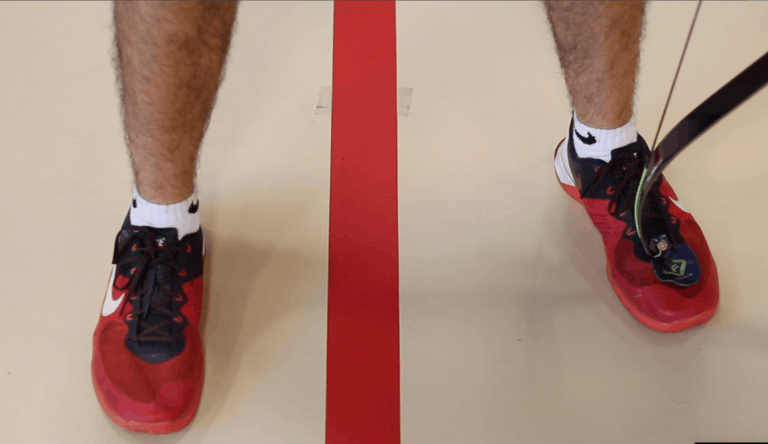 What is the open stance?

An open stance in archery involves placing the feet so that the feet, legs, and hips are facing the target more. This means the stance is what we call ‘open’. You can see how the stance looks in Image 3. You should start by first placing your right foot on the shooting line, with the ball of the foot in line with the gold. Turn your foot inwards slightly so that it is not quite parallel with the shooting line. You should then place your left foot a couple of inches further back than the right foot.

Finally, you want the left foot turned so it is not quite parallel with the right foot but slightly more open to the target. This is the open stance. Your feet should be approximately shoulder width apart, similar to the square stance. Though you can shoot with a slightly narrower foot position with the open stance without losing as much stability.

Benefits of the open stance

The open stance can be stronger in the wind. More rotation of the upper torso and abdomen creates rigidity through the body when it’s done correctly. Some archers may also be able to place their weight more consistently along the toe-heel line with this stance too. This can reduce forward or backward swaying along the shooting line direction.

The physical act of upper body rotation during the set-up phase can help you learn the movement needed to achieve correct shoulder alignment. This rotation and activation of the abdomen can also help prevent you from arching your back. The open stance can help improve your bow shoulder position and alignment when executed correctly.

If you like resting the bow limb on the right leg, the open stance can work very well with this.

Compromises of the open stance

It can be slower to learn the correct vertical posture using the open stance. It is often harder for you to feel any leaning forwards or backwards. So there can be a temptation to lean towards or away from the target when rotating your body.

A much larger amount of torso rotation means that the open stance places more stress on the spine and lower back than the square or closed stance. It generally requires more flexibility and strength in the upper body to position the shoulders. 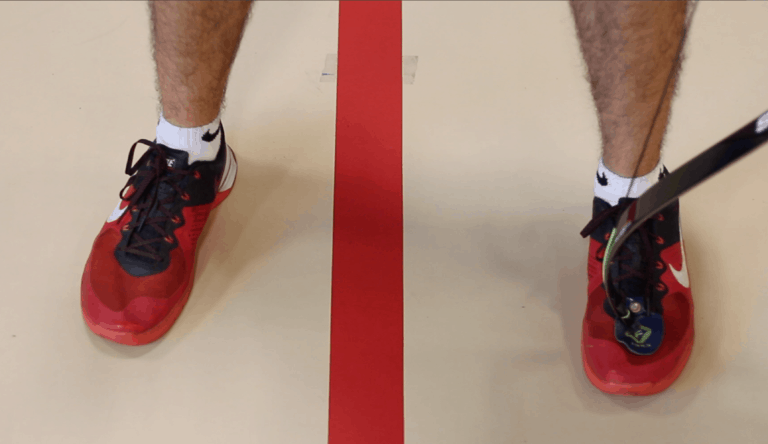 What is the closed stance?

The closed stance is simply a mirror image of the open stance. However, it is normally used with a much smaller angle to the shooting line than the open stance. As a result, it is actually more similar to the square stance than the open stance. You can see the closed stance in Image 4. The hips are slightly ‘closed’ with respect to the target, as the name suggests. Again, your feet should be the same width as in the square and open stances. Your hips must remain in the same position through the shot, and not be allowed to turn. The ball of your left foot should be in line with the gold and the right heel no more than 1 or 2 inches behind this.

Benefits & compromises of the closed stance

The closed stance is generally similar to the square stance in its use and execution. The benefits and compromises of this stance are similar as a result. The main issue with the closed stance is that most of your shoulder alignment is already done, so this can make it hard to maintain the draw side connection through the set and setup phases of the shot.

Regardless of which stance you use, make sure you position yourself correctly along the shooting line. If you are too far left of the target line then you compromise your alignment. Being too far right of the target line is normally less of an issue for a right handed archer. However, you ideally want the same body position relative to the target each time.

You can’t always stand in the exact centre position of the target line. The solution is to rotate your whole stance slightly towards the target if you are not in line with the gold. This will keep your stance consistent no matter where you stand.